Ooh what a week! Last week started very unproductive, I was able to convince Sarah, David and Colm about watching the soccer game live. We went to the stadium on Wednesday to buy our tickets -which cost $40 and started making plans for the weekend since it will be my last weekend in Medellin. Belly dancing was great on Thursday; we started learning a new move -more difficult but gracefully.

Friday, we had our oral exam which we all did well – we talked about health problems, my topic was la anemia de célula de hoz (sickle cell). Friday night, I met up with Lexie, Juan David and his sardinos (young) friends for a drink -they left to Club Acropolis but I went to a different club – Club RED – with the Koreans. Friday night has been highly anticipated because it will be the first time hanging out with the precious Koreans. So first it was me and the Koreans chicas – Gayoung (Violeta), HyunJi (Iris), and Eunyoung – we bought a medium bottle of Aguadentes (local alcohol in Colombia- very strong & nasty)- eating popcorn & sliced favored mango (a move I would later regret, my gut warned me not to eat that mango -it had a salty taste to it, but guess what, I ate the whole bowl of it because I didn’t want to drink on an empty stomach) and having fun. 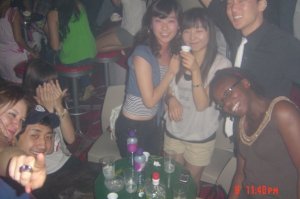 Lexie came to join us – we were having a fun girls night out. We ran out of liquor, by this time the Korean guys -Nunu, Choi and Son were already at the club. I was just so happy to party with them especially Son – okay, Son has been in my Spanish class since level 4, he is precious, cute and funny, everybody loves him & I do have a soft spot for him. Nunu is also cute and he dresses so fine. Anyways we asked Lexie to go buy us another drink; guess what she came back with – a large bottle of Aguadentes. This was when the night began, 9 people who had been previously drinking on something now had a large bottle of Aguadentes………

The music was awesome, and we were all having the maximum fun. Choi is a very good dancer -he was showing us how to dance the C-Walk, but off course we were too tipsy to learn. Lexie insisted on climbing up a platform to dance barefooted. Thank God, she didn’t fall.

She later disappeared to the restroom, Juan David went to check up on her but never returned -so I was worried and went to check up on them. Juan David was seating on a couch in the ladies restroom -drunk, and my dear Lexie was crying. With the help of some girl at the club -we persuaded Juan David to go home. I got into the taxi with them and that’s where the title of this week’s blog came about. Juan David was trying to give the cab driver directions to his house, Lexie started telling the taxi driver to ‘drive us to Scotland’ -at that point I just started laughing, it was too funny, you had to be there to appreciate the moment. Anyways we got them home and I headed home – this was around 2.30am. About two hours after I got home, I started vomiting – I vomited about 3 times before 8am. At first I thought maybe because I drank too much, but I was having a sharp sudden pain in the stomach and sweating even though it was cool and raining. 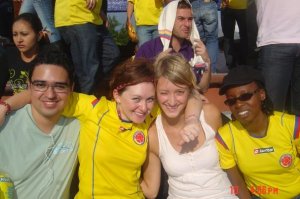 In short, I couldn’t go to the belly dancing class, I took a shower at 9am so I could feel better, but no I started having diarrhea, still vomiting, and the sharp pain. So everyone is thinking it’s just a hangover but hey guys seriously it wasn’t. Well I managed to get out of the house to meet Lexie at the metro station -we got out after 2 stops because I was feeling fainted, found a shopping mall where I had a vomiting and diarrhea episode. The game was awesome, David got there early and saved us good seats – the energy at the game was spectacular. It’s a shame Colombia lost to Chile -2 to 4, it’s been 15 years since they qualify. However, I’m glad I still went to see the game and supported Colombia. In the space of about 3 hours at the stadium, I had vomited about 12 times -I used Imodium for the diarrhea and it seem to help. When I got home, my host sisters (one a doctor, the other a medical student) gave me a pill for the vomiting and an herbal drink that finally slowed the vomiting and stopped the sharp pain. I’m really appreciative of my amazing friends that were looking after me at the stadium, sending text messages to check up on me and my host family for caring. For the record, I had food poisoning.
I missed the Oktoberfest event that Saturday night but was later told I didn’t miss much. On Sunday, I felt way better – still weak but wayyyyyyyy better! I hung out with Lexie and Sarah at Juliana’s house. Juliana is so cool, she is the coolest Colombian girl I have met here. Today (the 12th) is a public holiday in Colombia – I went to Lexie because they were having a BBQ to celebrate her birthday which is on Wednesday. I love Lexie’s family -they are soooo awesome, when I got to their house, her little brother ran up to hug me. They are so lovely, I’ll surely miss them.

This week will surely be emotional because I’m leaving Medellin by the end of the week. I will be going to Bogota- the capital of Colombia first, then the famous or infamous Cali. Oh, I didn’t go to swimming lessons with Colm because I was scared. 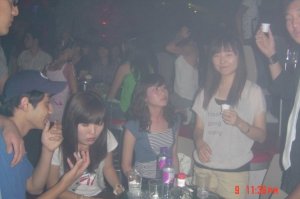 This week, I’m planning on visiting the museum of modern arts because I got free pass and I heard of a mosque here I want to check out. Now, I got to go because I have a final exam tomorrow……………ciao

!Chimba is a slang word for cool in Colombia!

This week has been every eventful. First – we (Lexie and myself) started the belly dancing class last Saturday – it was awesome, the ladies were very nice and the maestra (teacher) is very beautiful, flexible and graceful. The Thursday class is a combination of musical dance and belly dancing – a guy (a very cute guy with dreads) taught the musical section of the class; we did some exercise on rhymes, harmony, melody and how to concentrate. Mind you, this was totally in Spanish and I understood everything…….

Last Saturday (the 5th), on our way from the belly dancing class, we passed by the stadium – there were so many people because Colombia was playing against Ecuador – we won that match -2:1. We bought a Colombian jersey to support the players and it looked good on us. However, Thursday was sad because we lost to Uruguay 3:1 – very sad.

On Friday, we had our oral exam – I was nervous because I’m not yet very confident about talking in past tense (there are 4 different types of past tense in Spanish which makes it very difficult) in Spanish.

I met some guys from Congo and Kenya at the university. I’m very impressed with the guys from Congo because the learnt English in Kenya just 6 months ago and they speak it pretty good, now they adding Spanish to the 3 other languages they speak – Que Rico! I also started processing my student visa -it’s a very complicated process, an agency here in Medellin will help me obtain a student visa in Bogota the capital – which is good so I don’t have to travel to Bogota. When I get my passport back on Thursday, then I have to go to DAS (immigration department) to register -not looking forward to that because they have a reputation for being very mean.

Yesterday we went to the theater to watch a belly dancing show -it was AWESOME, the show was opened by two beautiful girls and they danced so beautifully, the rest of the other belly dancers were elegant looking and they sure know what they are doing. The drummers and flute players were amazing too. After the show, we went to ‘Wambar’ in Las Palmas to celebrate Jesus’ 18th birthday. Jesus is one of our Colombian friend.

It was a fun night especially when Lexie got tipsy on a half cup of white wine -how sad! Anyways it was a very fun night, got home at 2.52am Sunday morning. Now it’s almost 1pm and am still feeling tired and sleepy but I have to study – I have my final exam (for level 4 Spanish) on Monday.

I could not video much of the belly dancing show and take a lot of pictures because the battery of my Camera was dead (all Lexie’ fault)……..Anyways am looking forward to next week – I have no idea what it’s going to bring but am sure it will be eventful.