This was another trip that was difficult to plan. There wasn’t much information online. I wanted to stay in the capital – Apia and explore the island from there. However, the review for hotels in my price range were awful and I couldn’t afford the higher priced hotels. 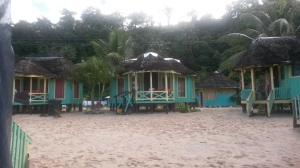 So I settled for a place two hours away from Apia – the capital. The place – Taufua Beach Fales has an amazing reputation and the beaches in the area are great. When I booked this beach fale, I knew I was opening up my mind to try something new and get out of my comfort zone.

Day One: Arrived around 4pm, got a sim card at the airport and went with the airport pick up person sent by the beach fale. We started on the long ride to Taufua. The road were great for the most part. We arrived at the fale just in time for dinner. All meals are provided by the fale at a set time, family style.

I met lot of people at the dinner table from various countries. There was an Argentian young couple doing one year holiday-working visa program in New Zealand. They pick fruits for a few months then travel for a few months. They did one year in Australia before going to New Zealand. Met another couple – guy from USA (Florida) and girl from the Uk. Also doing the same thing but not picking fruits. I drew some inspiration from their stories and stored up a few ideas for future references.

The staffs at Taufau are super amazing!

Jade (I met her in Fiji) messages me about a Rudgy game the next day. I told her sure, everyone at my beach fale was going. She said she would try and get tickets.

Day Two: Met a group of people from New Zealand at breakfast. They asked for my plans for the day, I told them I would be going to town and maybe see the ganme if my friend Jade is able to get ticket. They said they were going to town as well for the game. They offered me a ride since I didn’t rent a car and I was going to take a taxi to town. How nice of them, they saved me USD$58 :). 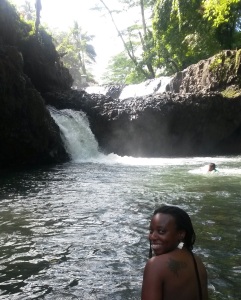 Around 11am, we head out to town. On own way, we stopped to see the Papapapitan Waterfalls and the Bahia Temple. We also stopped for lunch at a cool rusti place.

We get to the stadium around 2.45pm. We split ways without exchanging contact hahaha (silly). I met up with Jade and we proceeded to our seat. The game started promptly at 3pm with the national athem of the two countries – Samoa and Rep. of Georgia. This was going to be my first Rudgy game and I had no (still don’t) clue about the rules of the game. Still it was exciting. The game ended up in a draw. I decided to go to dinner with Jade since I couldn’t get in touch with the folks I came to town with. 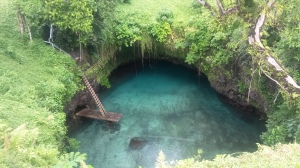 We went to a Chinese place, the food was so much!! I later got a taxi back to my fale. Saturday night at my fale is ‘FiaFia Night’ – which simply means a cultural performance. They peformed cultural dances including the fire dance which was tres impressive! The men performing were shirtless and built. The women in the audience paid 100% attention :). The show ended with a Haka performance. Great way to end the night. You can watch the video on FiaFia Night here  and the Fire dance here on my YouTube page .

Day Three: On Friday, I had contacted Polynesia Xplorer for a possible tour on the island (Upolu) I was in. I had assumed the beach fale would have their own organized tour but I was told since most guest at the fale rented a vechicle, there was no need for organizimg a tour. Well on Sat, I confirmed with Beatrice from Polynesian Xplorer for a tour today (Sunday).

She came for me after breakfast. We clicked and it felt like we had known each other for a long time. We started of at Sopoaga Waterfalls where she showed me how they break open coconut and squeeze out the milk with a sponge. After that we went to To Sua Trench (a volcanic eruption I believe). It was beautiful, pictures can not do it justice. To get to the water, you will have to go down this really steep stairs. I was beyond nervous but Beatrice convinced me and encourgaged me all the way down.

Beatrice showing me how they get coconut milk

The tour proceeded to another watefall –Togitogiga Waterfalls-  where you could swim. The tour ended at Fao Fao Beach Fale where we had a late lunch . The tour wasn’t exactly cheap for a solo traveller but it was all worth it.

Day Four: I decided to explore the other island in Samoa called Savaii island. To get there, I had to take an early morning (6am) taxi to town (Apia) then a hour ferry. When I arrived at Savaii, I went straight to Tourist Office which is just a 5 mins walk from the ferry whart. I wanted to get an idea of taxi prices for places I would like to visit. They gave me a price range and I got a taxi to take me to three location and back to the whart for 200 Samoan Talas (USD$78). By the way, you will be hustled by several taxi drivers. Ignore them and walk to the tourist office. 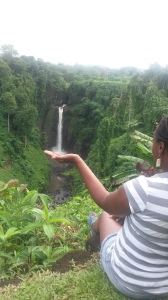 We went to the Lava Field first – it took us about an hour to get there. It used to be a village, there was an eruption and lava slowly took over the village. Most people were able to get out alive. Now, you can walk around and see the damage the lava caused. We went to the Blowholes afterwards, on the other side of town so almost an hour to get there as well. You still had to walk 1 mile or so from the beach car park. I don’t really know the scientific explanation for blowholes, you can read it here. There is a big eruption of water from several holes in the rocks – that’s what the blowholes looked like. Fascinating!

Last we went to a waterfalls, Afu Aau Waterfalls. Also a good walking distance from the car park. You can swim there, the water is pretty cold. After that, I wanted to get lunch before going to the whart. The ferry left 30 minutes late. It took us longer to get to Upolu Island, about 2 hours because the ferry was the slow one. I got back to the Taufau Beach Fale around 7.30pm.

Day Five: The same folks from New Zealand offered me a ride to the airport in Apia because they were going sightseeing in town. We left around 11am. The flight to New Zealand was overbooked and they needed volunteers to give up their seat. I was tempted to take up that offer since they were going to pay for the hotel and give a NZ$500 voucher. I didn’t volunteer L because I was already not spending much time in New Zealand and I didn’t want to shorten my stay any further. 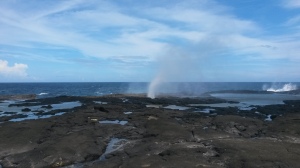 Four Things You Need To Know About Samoa 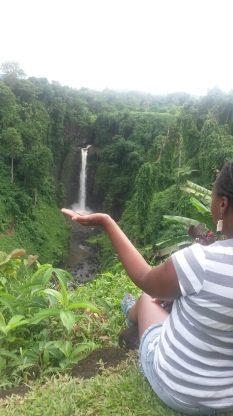 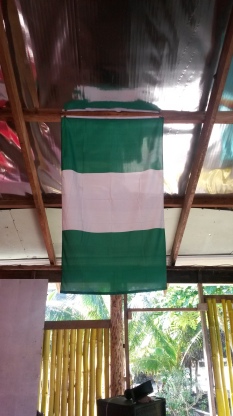