← Pisco and Chifa
The Battle of the Pisco! →

Bolivia is cheaper than Peru. Taxis are also cheap – about 10-15 Boliviano (USD$1 = 6.7Bolivano) for a 20-30minutes ride. Copacabana was my first stop in the country, much nicer than Puno in Peru. I did the half a day tour of sun Island. This island is so beautiful; hiking up the island was not easy. Some old guy I met on the boat happily gave me the tour of the Island. He explained the difference between the Sun Temple and the Palacio de Inca. The former is a spiritual journey while the later is physical structure with great significant for the Incas. The food in Copacabana is not so great. 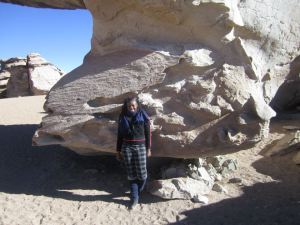 La Paz was fun. I stayed with a couchsurfer in Miraflores part of town. I went winter shopping in La Paz in a market called La Feria del Alto. I needed winter clothing for my upcoming visit to Salar de Uyuni (Salt Lake). I got a winter jacket, thermal base layers (top & bottom), sweater, leg warmer, winter hat & pants and socks 200Bolivaros (USD$30)– cheap, right? And the winter jacket is Ralph Lauren.

I left La Paz after 2 days for an Afro-Boliviano town in the Yungas region. The town is called Tocaña – about 3hours from La Paz. To get there, you have to go through the ‘Death Road’; it is called this because it has the highest number of death (caused by accidents) in the world. Well I made it up and down the death road. The road to this village is not paved. The houses are sparely located on the steep hill and there’s abundant of forests in between houses. I had fun in Tocaña, the people in the community were very pleasant.

After Tocaña, I went to Cochabamba. I had mixed feeling about this city because folks from La Paz and Tocaña told me Cochabamba is the most dangerous city in Bolivia, so I had reasons to be scared. I arrived at the bus terminal in Cochabamba at 5.30am but waited to 7.30am because that was the safest option. Folks from my bus also waited in the terminal until it was day light. My friend’s mum picked me up from the terminal. She is pretty cool, I stayed at her house and she made me the most delicious food so far from this trip. I also met up with Sandy – an Afro-Bolivian I met last year August in Honduras at a conference. We hung out for a few hours then it was time to leave Cochabamba for Uyuni. 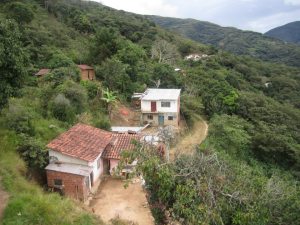 There is no direct bus to Uyuni, so you have to catch the bus to Oruro then take either the bus or train to Uyuni. I decided to take the train, we arrived at Uyuni at 2.30am in the morning and it was freezing cold. I woke up 6 hours later and booked a 3 days tour of the Salar de Uyuni. The tour starts at 10.30am and I booked mine at 10am which left no time to shop around and bargain for good price. In the end I paid 800Bolivanos (USD $114) for the tour. The tour includes accommodation for the 2 nights, food and guide. The only thing not included is entrance to the 2 parks.

The tour was amazing. I had a great group (there are 6 people in the group) and we had fun. The weather was freezing – sometimes below 0 with no heating. On the first day, we visited the train wreck, the salar and isla pescador (fish island). By the way, it wasn’t an island nor did it have any fish. 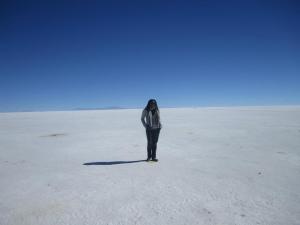 On the second day, we visited some volcanoes and 3 lagoons. It was warm during the day but extra freezing as soon as the sun went down. The hotel we placed in was very basic compared to the first night. On the first night, we placed at this really cute place made from salt. There was no floor made of cement, instead the floor was salt. All six folks from your group stayed in the same room. On the third day, we went to a thermal springs – a pond of very hot water in the middle of a very cold place. Amazing but I did not dare go into the hot springs because of the freezing weather one would experience as soon as you come out from the hot springs. After this, I changed jeep so I could transfer to Chile.

Things you need for the 2 or 3 or 4 days tour of Salar de Uyuni:

Very warm clothing – wool everything: socks, hat, sweater, thermal base layers, a real winter jacket, wet wipes (it is almost impossible to take a shower, so you need this), toilet paper (bring your, the hotel/hostel never have one), enough cash (there is no ATM or Casa de cambio) and medicine for attitude sickness – the elevation go up to 5800. I paid 800Bolivianos but I met others than paid 580Bolivaros, so give yourself a few hours or even a day to shop around for a good price – there are 80 tour agencies in Uyuni.

As for the title, I was in Bolivia illegally. US citizens have to pay a fee of USD $135 to enter Bolivia. I didn’t want to pay that so I decided to use my Nigerian passport. I checked with the consulate in Peru and I was told I would get a visa with my Nigerian passport on arrival. Well, that didn’t happen, the immigration folk at the border said I have to go back to Peru which offcourse I didn’t want to. After arguing for almost an hour, I paid $20 to enter Bolivia (illegally because my passport was not stamped). And off course, I had to pay another $20 to leave the country – the price was negotiated from the $80 fine I was told I have to pay. Would I do this again? Probably not! Next time I would get all necessary visas on my Nigerian passport (that is if the fee for US citizen is high) before getting to my travel destination.

← Pisco and Chifa
The Battle of the Pisco! →